Once upon an inner child 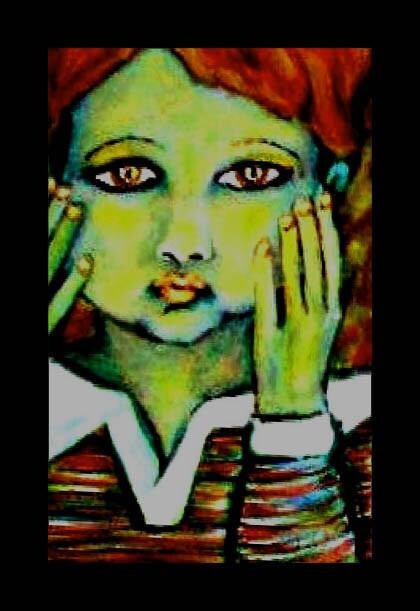 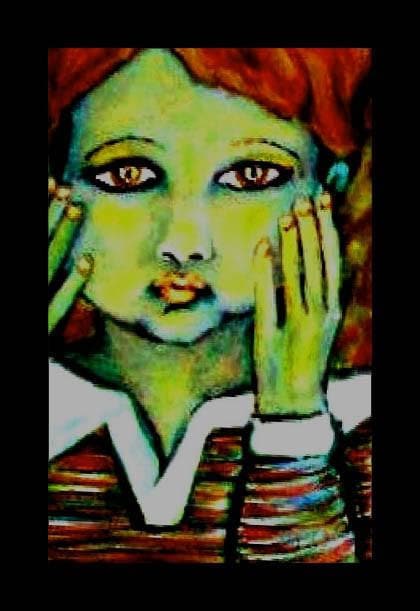 Once upon a time called right now, in a space called here, reconciling myself to the uncertainty of the artist plight, like a daily ritual, I am tentatively at peace, set up outside an art gallery, where like an orphanage for crumbs of the artist’s soul, objects inexplicably willed into creation rest on display awaiting their destined benefactor to recognize them as their own and I feel claimed by the “once,” in the once upon a time. I remind my inner child that she is not out of place; it is that time is catching up to the wisdom beyond her age. And I think of how, while I never clearly visualized making it this far, the part of me who cherished the journey, as much as the notion of arrival, trusted that the hauntings of poems scattered along the road were what kept my dreams of companionship alive. Throughout my lifetimes played by musicians in the best and worst ways, with artists fixated on the light or the darkness and writers who twist the head and heart inside out and upside down with elaborate insights into a whole lot of nothing, I have learned to live elevated by the bleats and squeals of my children and our cosmic vibrations, my palette playground where a bold and brash working composition may defy the rules of indoctrinated technique or conventional perspective, and my blatherings where words are the double edged sword promising both to illuminate and extinguish the hope of mental clarithe religious experience of a toddler trying on her mother’s shoes, reminding myself that people tend to conflate age and wisdom. So, now that I have arrived to this mythical time called right now, I could have it made... If only I could embrace the cloak of my weathered body and rock it to the bittersweet end of this masquerade, flaunting the savory spontaneity of cheesy rhymes, trite truths and certainties of suffering the inevitable misfortunes of mortality and the ever confounding ego. It is not the plateau of ego consumed by validation beyond survival and the sustenance of my children that binds me, nor some nefarious cuddly creature on the back. It is the little voices that say money and power are superficial perversions of utopia, as the starry eyed little girl kicks and cries “magic is real, dreams do come true and happy endings are not just the stuff of fairy tales and Tijuana brothels.” And from the other side of her mouth she sings that it is nature’s candy that grows on trees and the lolly of this commercialism paved world can not satiate that sweet spot where the once upon a time, the right now and the inconceivable culmination of it all play in symphonic storms before divine or devoid royalty, clad in the transcendence of time, space, human experience and fragments of soul... the calamity of unknowingly “being in the know” and the calm of knowingly submitting to unknowing. Circular logic is what has saved me from the trap of too many kindred spirits, who invested their faith in the expectation of enlightenment only to be morbidly disappointed, while my overt irrationality keeps me soft on despicable, misguided or complacent and in many other ways loathsome humanity. Without idolatry of any other school of thought or symbol of righteousness or modern exaltation, I marvel in my inability to put my finger on what exactly people seem to be emulating. Without a brand of jeans, song, poem, or other beacon upon which to focus as an ideal of stylistic achievement, I am gratefully at the mercy of the wind, unopposed to anything consensual, even truly insane notions of changing the world, by claiming our own qualifications of that to be changed, it’s nature or it prospective transformation, which ironically preclude us from fancying ourselves an exception… while inspiring us to attach ourselves irrationally to people and places and things that prompt us to remember to think and feel… and breathe, while we still can. Being honest with myself for better or worse is what keeps me real and what dictates the reigns of other’s proximity.  Accepting that fear is what ultimately guides me, not the fear of the boogeyman, failure or meaninglessness, so much as that primal instinct to understand the resources and threats of the natural habitat in general, I wrestle with my oversimplification of personality types. With a hard wired aversion to those prone to anger and probably more prone to internalizing sorrow than I should be, my dynamism is what keeps me going and my fascination with the dynamism of others is what keeps me from detachment. It is refreshing when I am reminded that the collateral damage to the psyche of being open is not in vein and I am confronted with a connection that affirms my not so grandiose grandiosity complex, that my inner child’s deepest protected hope is to be an inspiration, trusting that happiness and abundance can never be truly respected if they are the goal, rather than a welcome natural consequence. As I exist a shadow to both the influential and inconsequential who carry on without giving me a thought, the good news is that at least those proficient in their fields of the humanities may recognise the futility of calling attention to my shortcomings and just let me co-exist. The psychologist may note that some of my conclusions are perhaps unconventional, but my reasoning is impeccable and my heart is pure. The musical master may point out my lack of training, but not dispute my groove, the master painter may criticise my abandonment of reflection, while recognizing my work’s more important invitation for the reflection of the viewer, and the professor of literary genius may have a field day with my premature illertations, and run on sentences, but will hopefully give me credit for showing up, in the “right now” of this ever evolving once upon a time.